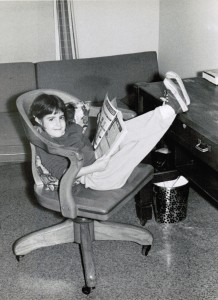 I was born and raised in the suburbs of Minneapolis, Minnesota. At age three, I joined the avid readers’ club and set out on my first book journey with Dick and Jane. Hooked on the printed word, my hands eagerly reached for Little Golden Books, Dr. Seuss, Little Bear, Curious George, and Danny and the Dinosaur. I discovered the world of fiction was endless.

My writing career began in elementary school. I recorded pages and pages of mundane events in a daily diary. Of course, I kept these top-secret musings under lock and key and hidden away in a safe place—my underwear drawer. That wasn’t all. The nonsensical rhymes of Dr. Seuss urged me to create my own nonsensical poetry. My work was true art. My first collection was completed in second grade, and my mother proudly shared it with my teacher at conferences. I can still recite a poem or two from memory.

Besides dabbling in poetry, I wrote short-shorts and promoted myself to editor and publisher. Each carefully thought-up sentence was printed on lined sheets that were glued to construction paper. The completed pages were stapled together and the illustrator, also myself, then took colored pencil in hand. Worldwide distribution soared at one copy. Sadly, all titles are now out of print.

I ventured into screenwriting in the later elementary grades, after being cast as Chicken Little in a summer school play. I dabbled with the dark side; my first play was entitled Countess Dracula Strikes. I handed copies to each of my friends, convincing them to play a role. I, of course, cast myself as the countess.

Expanding my reading repertoire, I delved into the world of Nancy Drew, Bess Martin, and George Fayne. I spent winter evenings sitting at the kitchen table; a book in one hand and a mug of cocoa in the other. My growing stack of Nancy Drew mysteries soon rivaled my brother’s collection of Hardy Boys. Who would have thought both series were ghostwritten, and there were no such persons as Carolyn Keene or Franklin W. Dixon?

The desire and ability to write longer fiction emerged in junior high school. After reading the series of books by Laura Ingalls Wilder and then watching every episode of Little House on the Prairie, I embarked on a writing journey of pioneer adventures. This led to a collaboration with other distinguished teenage writers—also yet to be discovered—and the passing of a notebook as we each took turns writing scenes set in the 1800s.

In high school, I was a poet again. I concentrated my efforts on dark poetry and streams of consciousness. My childhood diaries were cast aside and replaced with journals filled with anger, frustration, and intense sadness as I stumbled through the teenage years.

My college poetry instructor encouraged me to submit my poem, “Daddy’s Little Girl,” to an anthology in the making. It was accepted and was published in Murmurs of the Past: An Anthology of Poetry and Prose. Although I considered this a high achievement, I took a hiatus from writing for the next 20 years to concentrate on work and raising a family. This was with the exception of composing an annual sarcastic holiday letter and recording break-through episodes of depression in a journal intended for my eyes only.

When I hit 40, now said to be the new 30, I was slammed to the ground with a major depression that would not let me rise, not even to my knees. For almost two years, writing became my lifeline. My daughter, a double major in creative writing and psychology, encouraged me to try to publish my 300 pages of sorrow—a manuscript tentatively titled No Method To This Madness: A Memoir.

As one thing often leads to another, my depression finally slithered away into remission and allowed me to venture forth with life. The Word Whippers, a writing group, welcomed me with pen and paper, helped polish my writing and editing skills, and supported my desire to publish.

Soon after, Tonka Times, a Minnetonka-based magazine, opened its pages to me, and I jumped at the opportunity of a by-line. Several of my Reflections articles were published throughout 2012 and 2013 and helped springboard my publishing experience in the media. As a result of honing my skills, one of my short stories, “A Killer In The Cornfield,” was included in the 2014 Twin Cities Sisters in Crime anthology, Festival of Crime.

And the writing doesn’t stop there. Besides the love of whipping out poetry and short fiction, I am working on a series of suspense novels with fellow Word Whipper and Brother in Crime William J. Anderson. Stay tuned as Book One battles its way through the perils of publication.

Yes, thanks to Dick and Jane and all the other fictional characters who continue to welcome me into their lives, this now 50-something-year-old still immerses herself, mind and soul, in the world of the printed word.